We asked Margaret about her time at Hull, and what had inspired the book:

For me, education never seemed to be a problem. The truth is, I didn’t work very hard at school or university. My A level results weren’t what they might have been but that was the only downside – or so it seemed when I was young. Wanting to read, learn, find out more in an intellectual sense came much later in my life.

I remember once forcing myself to roll out of my bed in my Cottingham Road student house at around 8.30am because I had to take a book I hadn’t read back to the library and feeling truly astonished that so many people were up and about on the campus…

However I did well enough to establish a career as a journalist and writer, thanks in part to the hours put in at Hullfire [the Hull student magazine]. On top of this, I always had an inner belief that if I had worked hard I would have done well and when I had my children I assumed they would do well too. They were both pretty much top of the class at primary school. Then my daughter went to secondary and seemed to stop learning. A total shock to my complacency-based system…

After two years of not knowing what to do we found out she was dyslexic. To say I didn’t see that one coming is something of an understatement. I needed to come to terms with this new information, as of course did she, and I was determined her own confidence in her future would not be rocked.

So a year and a half ago I started writing Creative, Successful, Dyslexic – a compilation of interviews with 23 high-achievers. I wanted them to inspire and enthuse my daughter and others with dyslexia. From my first interview with Darcey Bussell to my last with Eddie Izzard, I wanted their words to show that dyslexia need not be a by-word for struggle.

I ended up with a fascinating group of portraits that taught me as many lessons as it did my daughter.

I learnt that there is learning everywhere, not just when you walk through the school gates. Interior designer Kelly Hoppen learnt by moving the furniture around whenever her parents went out (driving them mad!) Creator of BBC series New Tricks and Silent Witness Nigel McCrery was educated by Radio Four, making up for his struggles with reading by hearing all the great works of literature as he sped up and down the country as an HGV driver.

One surprise was that this disparate group of sports people, entertainers, designers and writers all felt they had succeeded in part because of their dyslexia, not in spite of it. They believe dyslexia gave them the determination, creativity and outlook which enabled them to achieve. They said the way that dyslexia makes their brain work differently has been an advantage for many of them. So our perceived weaknesses can actually be our strengths. Who knew?

Another is that most felt that having just one adult on their side – often a parent or a teacher – was enough to keep their sense of self-belief intact and help them realise they were not ‘dumb’, just ‘different’, even if their schooldays were horrendously difficult. The attributes thought to be part of the dyslexic profile may not always help someone get a first class degree but they are attributes that can help them shine in the world of work.

As Benjamin Zephaniah told me, “We are the creative people. Use it to your advantage. See the world differently. We are the architects. We are the designers.” Scotland and Everton footballer Steven Naismith says, “If someone’s watching me play and thinking, ‘He’s lucky to be in the right position on the pitch,’ I would argue it is about more than luck. My mind is always working ahead thinking, ‘If the ball goes there and there I will have a better chance if I move there… These decisions are made subconsciously.’”

Anyone involved in education today, from children to parents to teachers, will know how heavily results-driven education is. Of course this puts pressure on them all (and I would argue too much pressure). However what is clear from my book is that, although academic success is great to have, there are other ways to succeed in life.

So, as well as supporting teachers to better help those with dyslexia – something that is much needed – let’s break away from a tunnel vision of education and support people with dyslexia to achieve in any way that works for them. 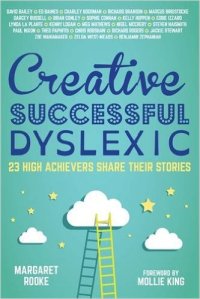 Read an excerpt in The Guardian by Benjamin Zephaniah