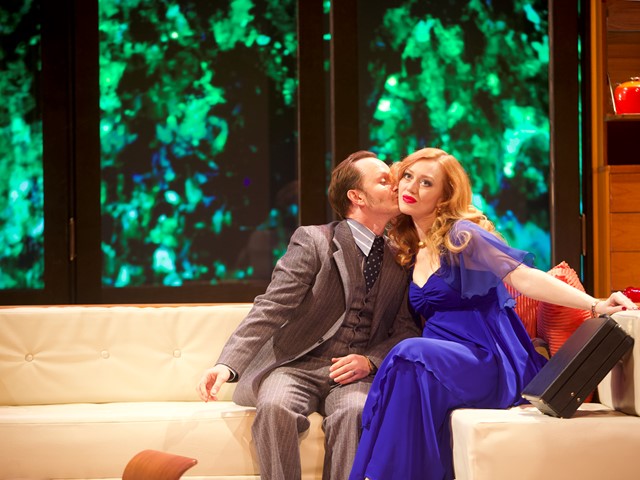 We were delighted to be joined by over 70 alumni for an excruciating but irresistible  night of discomfort and embarrasment at Hull Truck Theatre: a stage version of Mike Leigh’s comedy classic ‘Abigail’s Party’.

Living up to an iconic piece of television history (‘Abigail’s Party’ often features in lists of the best British TV shows) was always going to be a difficult task, but the cast and the director managed to pull it off, with the show maintaining the feel and character of the original without falling into the trap of being a pale imitation. The characters came across as fresh and engaging, pulling the audience into their quotidian squabbles and obsessions, and providing a great comic deconstruction of 1970’s British suburbia.

The title ‘Abigail’s Party’ is of course a misdirection. The eponymous party is only ever heard, distant in the background, never coming to the fore except in the conversations of the five main characters gathered in Beverley and Laurence’s living room. But whilst on the surface Abigail’s party is the source of their disagreements and concerns, it is only the mask that hides (badly) the real focus of their anxieties and troubles: each other.

Though laugh-out-loud funny, with some hilarious comedic performances, at heart the play is tragic. Barely able to maintain the facade of middle-class civility, the two couples at the heart of the play are most definitely not in love, and can hardly stand their partners. What holds them together is need and social expectation, rather than romantic love and care for one another, and this only serves to exacerbate their minor annoyances. Though we may laugh at their petty behaviours, the characters are also a warning: do not become overly concerned by possessions and social status. For these characters may be critical of the foolish young people enjoying Abigail’s party, but when all is stripped away they must surely recognise that this is where life is.