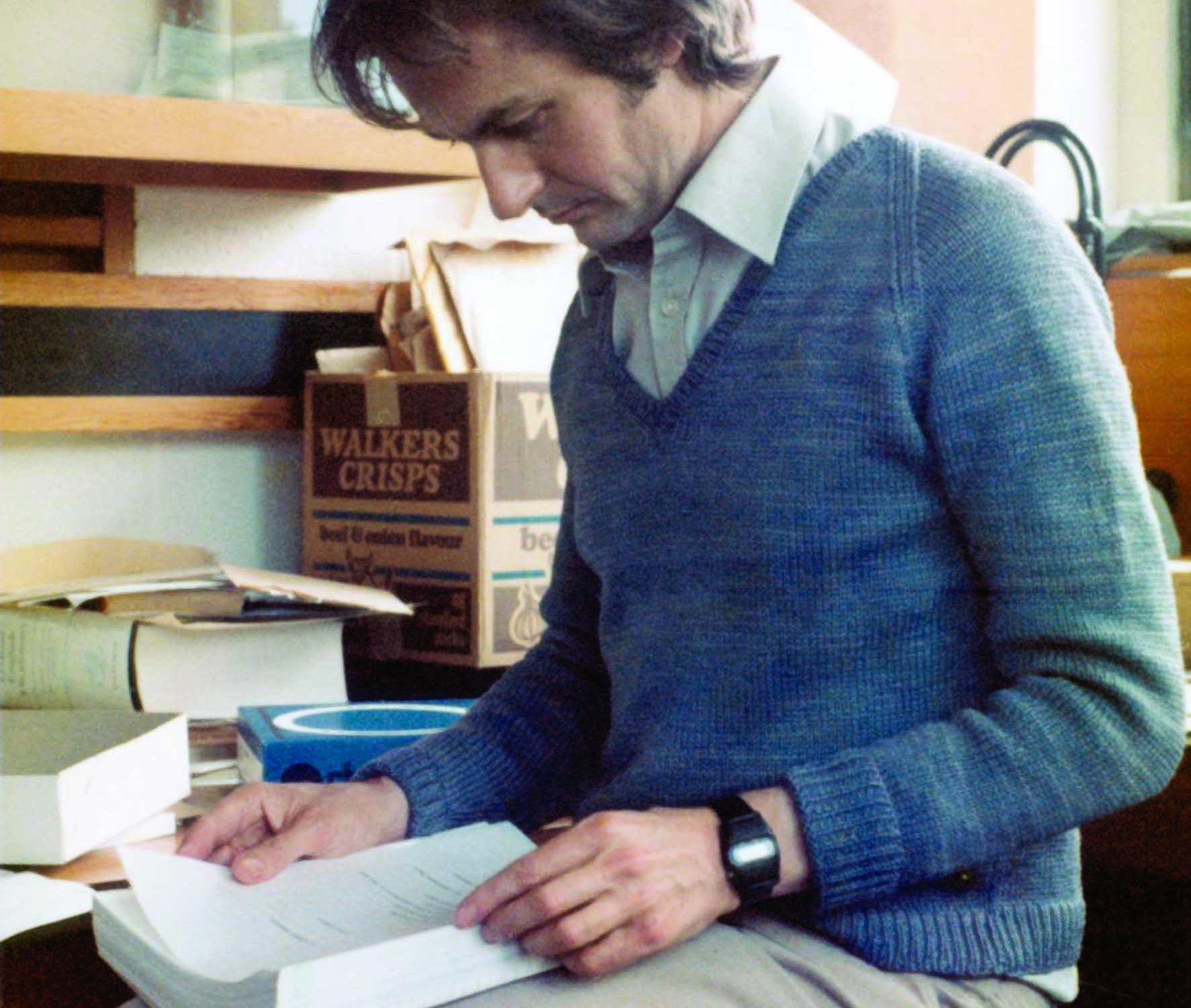 When alumnus Michael Rodgers (BSc Chemistry, 1961) began work as a commissioning editor, popular science did not exist as a publishing genre. Today, no bookshop is complete without its copies of Hawking, Pinker, and Dawkins. In 1976 Michael worked closely with Richard Dawkins on his million-copy bestseller The Selfish Gene (and later The Extended Phenotype, The Blind Watchmaker, Climbing Mount Improbable and, finally, Unweaving the Rainbow). Michael’s long career at five major publishing houses contributed significantly to capturing the public’s imagination for science, as well as setting the gold standard for chemistry textbooks when he published Peter Atkins’ Physical Chemistry. In 1978, Atkins’ book was a #1 bestseller around the world, and continues to be the seminal text in its 10th edition today. In this piece for us, Michael recounts the experiences which led to the publication of these influential books, and recalls his first achievements in the field of publishing as editor of Gooch, the journal of the Hull University student chemical society.

In February 1976 a letter from a colleague of someone called Richard Dawkins landed on my desk. I was a commissioning editor at the Oxford University Press and one of my interests was science for the general reader, popular science. The letter told me that Dawkins was writing a book, his first, tentatively called The Selfish Gene. What followed, persuading Richard Dawkins to sign up with the OUP and then working with him on his book, published the following October, was one of the most exciting periods of my life.

Years later (well, thirty or so years later), the idea of writing a book about a life in publishing gradually took hold of me. Here was a world wholly unfamiliar to outsiders, and yet what an amazing place I’d found it to be. I wanted to lift the veil on that world and communicate to others – complete outsiders – what it felt like meeting and working with extraordinary people, discovering at first hand ideas that, when hearing about them for the first time, were simply breathtaking.

But how did I get into book publishing in the first place? I can trace this back to my time as a research student in the chemistry department at Hull at the beginning of the 1960s (I graduated in chemistry in the summer of 1961, starting my PhD research the following autumn). A group of chums persuaded me to be the editor for a year of Gooch, the journal of the Hull University student chemical society. Gooch had been going for five years, appearing in a typewriter-set, duplicated format, and my secret wish when I took the job on was to transform it into a printed version. This was achieved and three issues were produced that year (October, 1962 and January and May, 1963).

I loved being the editor of Gooch: commissioning, writing, proof correcting, and – crucially – going round Hull on my bike selling advertising space to local firms. A hankering to be in publishing must have formed and lodged itself in my subconscious, but it was some years later before it was suddenly awakened.

After finishing my PhD in 1964 I spent a year in America on a postdoctoral fellowship, and on return to the UK I tried two different sorts of career. The first was as a research chemist in industry, but this lasted less than a year when I finally realized that research wasn’t really for me. And the other was as a chemistry teacher at a grammar school. This second attempt to find the right job initially worked well – I much enjoyed teaching – but the period when I felt I might have found the right occupation ended after a couple of years, and I later worked out why. First had come the discovery that there were parts of the course that I had never completely understood when I was at school myself. Revisiting them, knowing that I now had to master them, produced some eureka moments when explanations finally dawned on me. And these moments led in turn to spontaneous enthusiasm when I was in front of a class. After two years I had covered the complete syllabus and the magical moments of discovery had dried up: I concluded that I was not after all cut out to be a schoolteacher.

At just the right time, the autumn of 1968, when I had started my third year in teaching, I saw an advertisement for the position of ‘science field editor’ with the OUP. The job briefly outlined struck an immediate chord: the hankering in my subconscious, originally ignited by Gooch, had burst into life. The essential qualifications asked for were a science degree and ‘some publishing experience’. I sent with my application copies of the three issues of Gooch I had edited, hoping that they would count as publishing experience. Apparently they did, and I eventually got the job.

I started this piece with Richard Dawkins, working with him on his first book, The Selfish Gene. Later, we collaborated on books that followed, first The Extended Phenotype and then The Blind Watchmaker, Climbing Mount Improbable and, finally, Unweaving the Rainbow. They were not repeats of The Selfish Gene experience, in that there can be only one first time, one experience of being completely bowled over by something that has never happened before, but that said, each one was memorable and wonderfully exhilarating. Each time, when reading draft chapters, I found myself occasionally pausing to allow nervous energy of excitement to dissipate.

A different sort of excitement came when working on textbooks and the story behind one of them, Peter Atkins’s Physical Chemistry, has a pleasing connection with my old department at Hull. The realization that there was a genuine need for a new text gradually came to me during the early 1970s, following conversations with physical chemists at various universities, and the very first of these conversations happened to be in the chemistry department at Hull. I was there on a routine campus visit in 1970 and the chemistry lecturer who mentioned in passing that he and his colleagues were fed up with the existing physical chemistry texts was Dr John Shorter, my former PhD supervisor. Atkins’s textbook, published in 1978, quickly became the leading textbook in its field in the world, a position it still holds today. [A THES piece in 1998 indicated how popular the book was in its sixth edition. It is now in its tenth].

I decided to write a book that would reveal the stories behind some extraordinary books, and provide a behind-the-scenes view of the world of books, authors, and ideas. I had been an editor for almost thirty five years, seeing myself as a midwife, bringing books into the world. You would think I would know all about what it feels like being an author, but not a bit of it. At each stage I suffered the worries and stresses and neuroses that I’d seen so often from the other side, as authors create something they feel passionate about. I mentioned this to a friend when my book was in production at the publishers. Michael, she said, you should think of yourself as an elderly ‘primigravida’ (medical speak for a woman expecting her first child). That was helpful!

In 2010 I gave a talk to the postgraduate publishing class at Oxford Brookes University, repeating it in 2011 and 2012. Throughout my career as a commissioning editor in science, I had always associated postgraduate classes with small numbers, this explaining my surprise when I gave my talks at Brookes. The class each time contained around ninety students, for me a huge number. Something else struck me too: the proportion of women. Of the ninety in each class, only half a dozen or so were men. This ratio, I learned, closely matched the one in the book publishing industry as a whole. And there was another asymmetry I found intriguing. On one occasion I asked for a show of hands: how many in the class of ninety had a science degree? Three or four hands went up.

It would please me greatly if reading my book persuaded just one science graduate to go into publishing. Have I missed publishing and the life it brings? I thought of this a few years after my retirement (which was at the end of 2003) when I was being entertained to lunch by one of my former authors. If only he had the time, he said, he would love to write a book he had in mind. Then he went on to describe it. Suddenly, I recognized the symptoms: the mounting excitement on listening to an author describing a book they’d like to write, feeling certain that it would work, and sell. That is one thing I still miss.