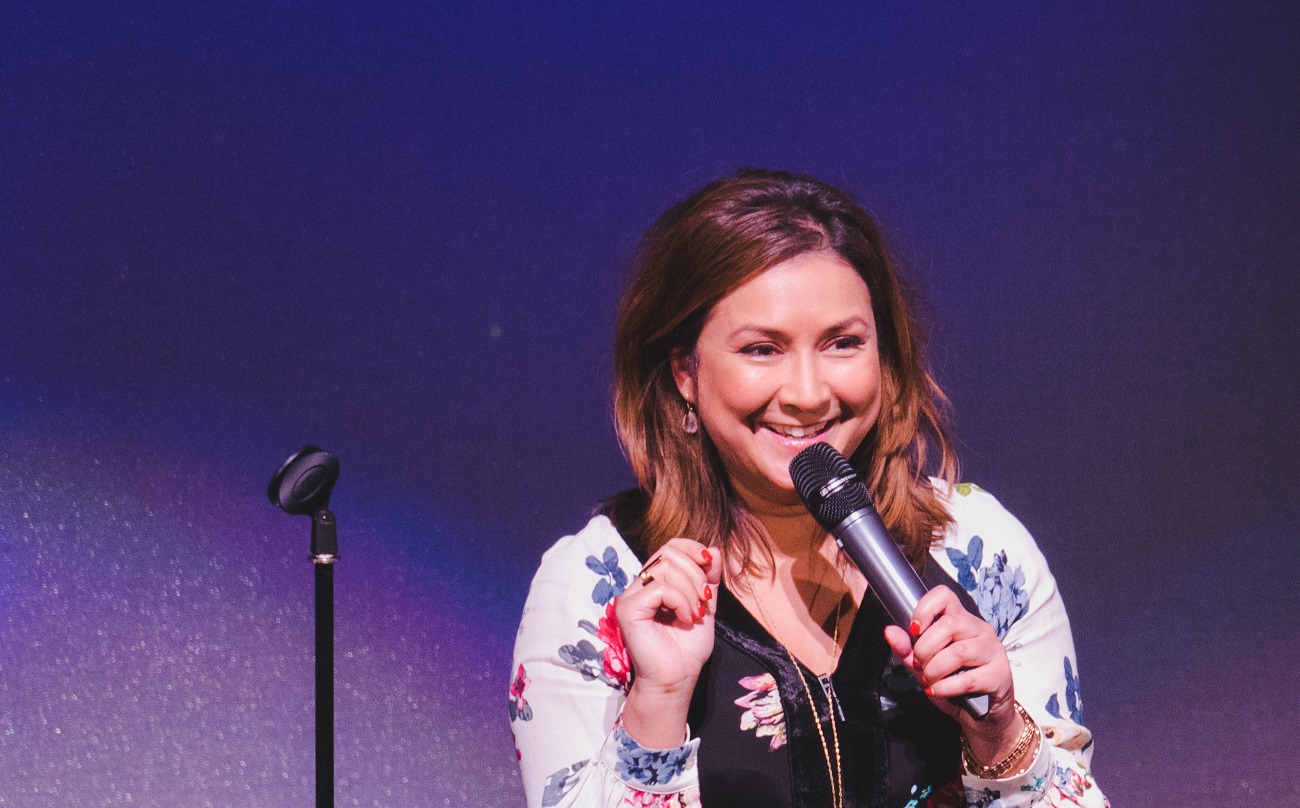 We were delighted to be joined by over 250 alumni, students, staff and members of the public when advisor, political commentator and comedian Ayesha Hazarika returned to her alma mater for an “Inspired in Hull” lecture on Friday 17th November. The lucky attendees were treated to a masterclass in public performance as Ayesha slipped effortlessly between comedy, personal storytelling, behind-the-scenes political anecdotes, and motivational careers advice. Never less than warm, funny, engaging and approachable, Ayesha brought the world of Westminster to Middleton Hall in Hull and made it understandable and accessible, imploring students in the hall to get involved and to bring their diversity of experience and outlook to a world that remains overly populated with “Robs, Toms and Simons”.

Ayesha was introduced by Professor Kathryn Haynes, Dean of Business, Law and Politics who described Ayesha’s career journey after leaving the University of Hull, referencing her formidable work rate.  Professor Haynes described her ascent from a position as Administrator at the Ministry of Agriculture to the Press Office at the Department of Trade and Industry, where she honed her journalistic skills, and on to roles as a Special Adviser first to Gordon Brown, then to Harriet Harman and finally to Ed Miliband. That alone would have been an extraordinary achievement for anyone, but alongside her day job, Ayesha was also honing her skills in the twilight world of stand-up comedy.

“For six years I did about four gigs a week. I’d finish at the DTI, get picked up by a bunch of comedians, drive to Manchester, play for about a tenner, drive back to London, get back at 3 or 4am, then get up and go to work next day”.

Ayesha opened her performance by talking about her friends – “the best thing about studying at Hull”, and this personal touch set the tone for the whole evening. When a member of the audience asked where her comedy came from, Ayesha spoke about how she was bullied at school, and used humour to fight back. Although Ayesha’s life has taken her to the corridors of power, the story she tells is about people, and it is this perspective which makes everything relatable and, above all, funny.

Ayesha’s academic journey is inhabited by recognisable and relatable people – a family that expects, friends that support, a lecturer that inspires. What is more disarming is the sympathy that she evokes from the audience towards senior politicians; we are treated to a tale about Ed Miliband, nervously approaching a Prime Ministers Questions that will cover the subject of the badger cull, worried that he, with a streak of grey in his hair, might be the political equivalent of a badger. Another tale has Harriet Harman, trapped in her house by political activists, desperately trying to get in touch with an oblivious Ayesha who has switched off her mobile phone, missing over 70 desperate calls!

‘Channel your inner Nicola Sturgeon,’ Ayesha advises the audience, breaking from an hilariously satirical impersonation of the Scottish First Minister.

She has a lot of good advice for the audience!

‘Fail gloriously, and own your failures,’ she says, towards the end. There is nothing to fear in failure, according to Ayesha, and it is in fact a necessary step towards greater and greater successes.

During the Q&A and after the event close Ayesha spoke to members of the audience, answering questions, providing guidance and advice and swapping details with students looking to develop their own careers in politics. Her evening concluded with a visit to the Student Union with long-term friends for chat, memories and, of course, lashings of that student staple – snakebite and black!

Thank you to everyone who came, we hope that we will see you again at future “Inspired in Hull” events. Thanks also to Ayesha for a hilarious and educational evening. We can’t wait to welcome Ayesha and her friends back to campus again!